Miratech is reviewing its previous studies on Google search results pages and also taking a look at user behavior on mobile phones.
Conclusion: Google ads get even more attention on smartphones!

The first study analyzed how users behave on a Google search results page and talked about the famous Google Golden Triangle.

The second study focused on the visibility of Google ads.

Three years on, we have some new questions:

We conducted a user test with 18 participants: 10 French users and 8 Americans.

Each participant was set up in front of an individual computer screen. For the mobile phone tests, we displayed a smartphone emulator. For the computer tests, we simply displayed a Web browser. In both cases, we asked the users to perform some organic searches on Google. Using our eye tracking technology, we measured how participants looked at the pages as they browsed.

Instead of using their fingers as they would on a real smartphone, participants navigated around the emulator using a mouse. We were aware of the methodological bias this would cause and took this into account when calculating our results. We didn’t measure scroll and click times, for instance, because we know that these can be very different on a touch screen interface.

Visibility of Google ads on a smartphone 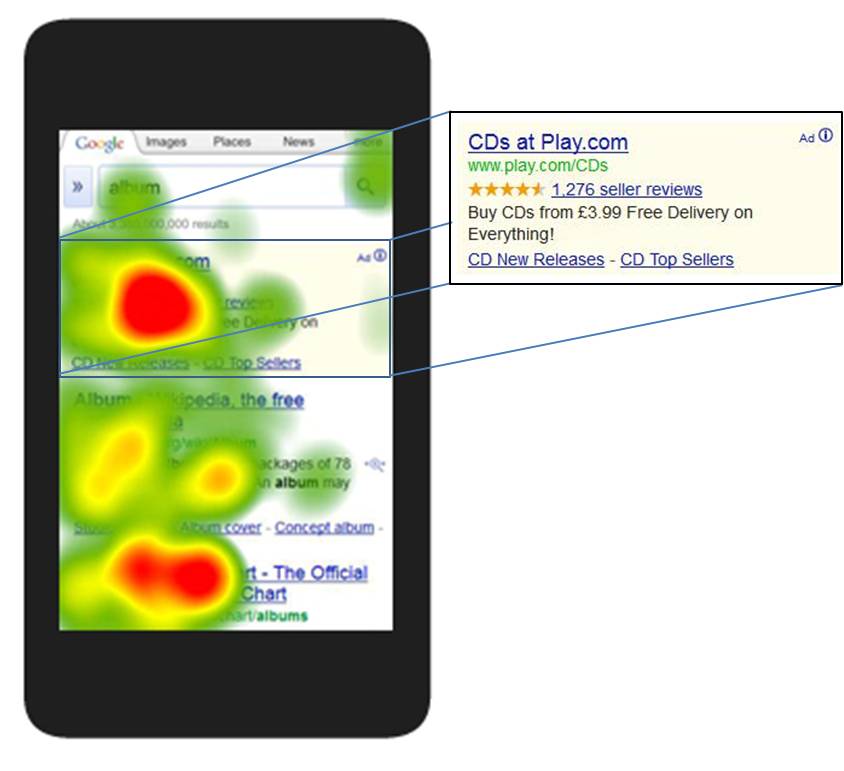 Because a Google ad takes up much more space on a smartphone screen than on a computer, it gets looked at a lot more. 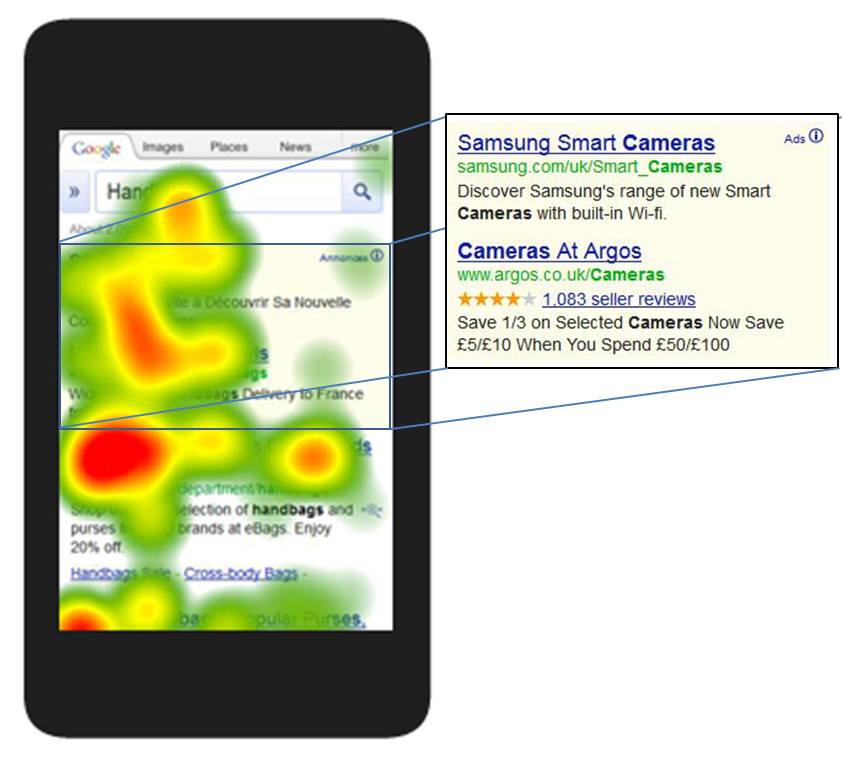 Two Google ads take up almost a third of a smartphone screen.

In our previous study, we had calculated that users looked at a single ad at the top of the page on a computer screen for 0.98 seconds.

For an ad with an equivalent position on a smartphone, the average gaze time is 1.57 seconds. That’s 60% longer than on a computer! 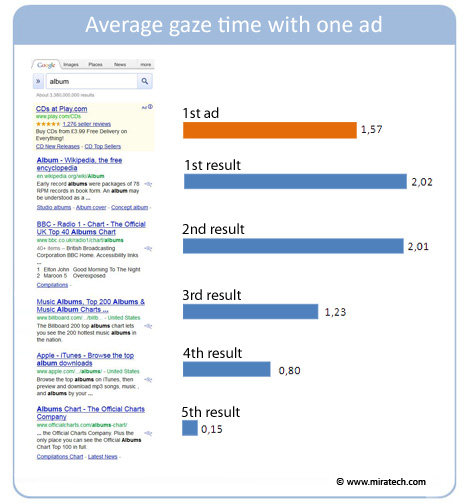 A Google ad at the top of a page gets 60% more gaze time on a smartphone than on a computer!

When there are two ads at the top of the page, the first gets more gaze time than the first organic search result!

The Golden Triangle appears on smartphones too

The “Google Golden Triangle” shows that Google search results get less and less gaze time as a user moves down the page.

The heat map of users’ cumulated eye activity forms a triangle on the page. You can see this result in our previous user test.

We have found that this natural phenomenon occurs on smartphone search results pages too.

The tops of search results pages naturally get more gaze time. This is what we call the “Golden Triangle” 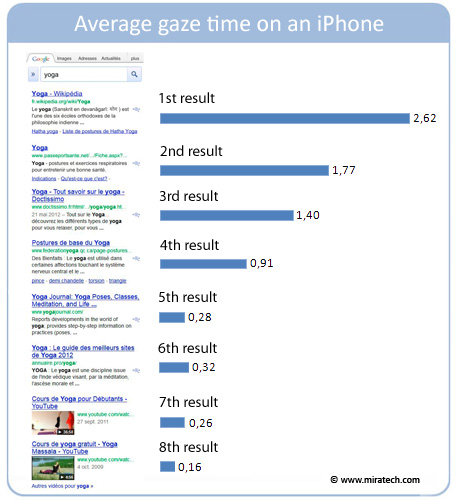 The “Google Golden Triangle” can be seen on smartphones in about the same proportions as on a computer.

The Golden Triangle now disappears on a computer

On a computer, the “Golden Triangle” now tends to disappear because rich content in search results changes user behavior on the page.

The presence of images, videos, thumbnails or lists shifts user focus in an unpredictable way. 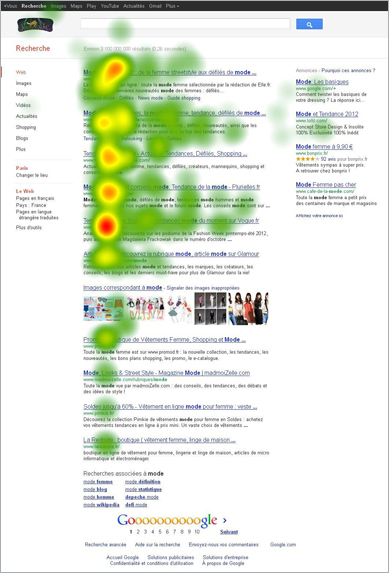 In other cases, a list of images can create a “visual barrier” that stops users from exploring the rest of the page.

The added features are not seen on a computer

On a computer, Google has trouble drawing attention to its added features because the left and right columns get very little gaze time.

In the test, they were never even clicked on, despite the fact that some of the scenarios presented to the users strongly encouraged their use. 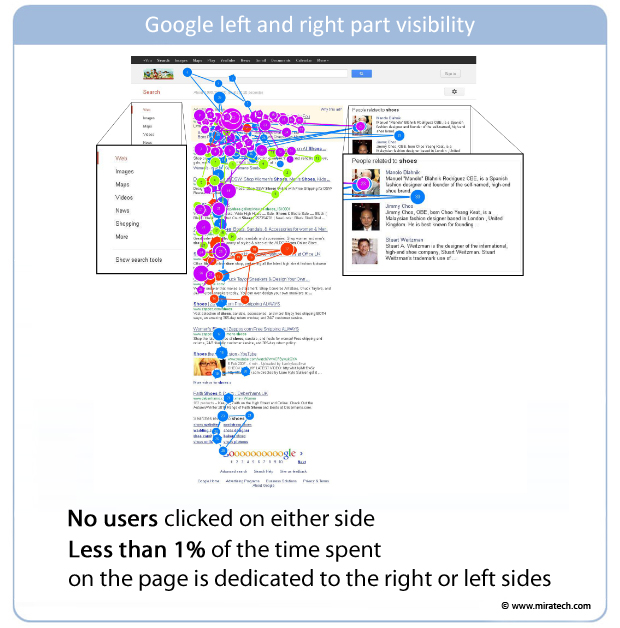 As is the case for all websites, the right and left columns were not looked at or used.